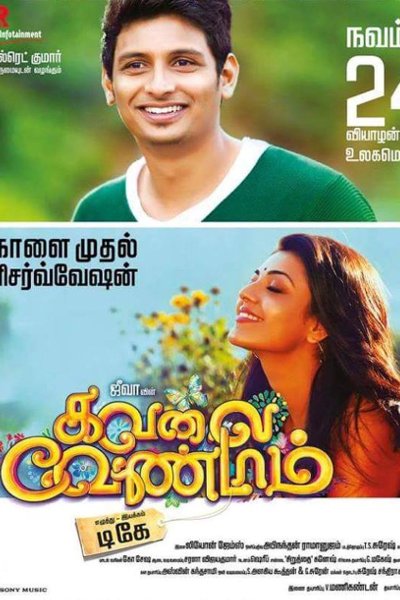 Jiiva's upcoming comedy flick Kavalai Vendam has been running in the post production works for a long time with the release date not being fixed. Earlier it was tentatively slated for October 7 release but did not materialise due to unknown reasons. Bankrolled by Elred Kumar under his home banner RS Infotainments, he has recently announced the release date to be November 24.

Venkat Prabhu's Chennai 28 II is also eyeing for November 25 release but it is likely to get postponed for December first week. As the title of the film suggests, Kavalai Vendam is an in-and-out comedy film with an ensemble cast of Jiiva, Kajal Aggarwal, Bobby Simha, Sunaina, Shruti Ramakrishnan, Karunakaran, RJ Balaji, Bala Saravanan and Mayilsamy.

Directed by Deekay of Yaamirukka Bayamey fame, the audio has been composed by Leon James known for scoring tunes in Kanchana 2. The music album with 4 tracks was unveiled on October 17. Abi & Abi Pictures who had distributed CV Kumar’s movies like Kadhalum Kadanthu Pogum and Iraivi has bought the theatrical distribution rights for Kavalai Vendam. 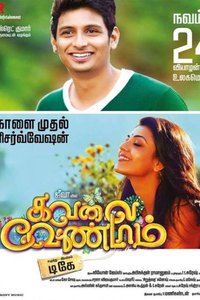 Not every production company gives films that completely fulfills the expectation of Audience, but certain production houses are master in it. One among them is, RS Infotainment, founded by the most promising producer Elred Kumar. Right from 'Vinnai Thandi Varuvaya' to the recently released 'Kav...see more

As the tough times of Reformation is on the full swing all that an average audience has to believe is in the concept of 'Don't Worry be happy'. "Kavalai Vendam" is a perfect foil on this concept. producer Elred Kumar on behalf of his banner RS Infotainment takes it as a moral responsibility t...see more