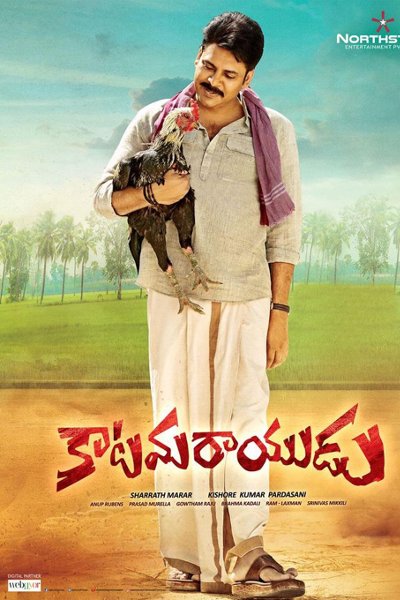 The first look motion poster of Katamarayudu, the upcoming movie from Pawan Kalyan and Shruti Haasan was released for the occasion of Diwali and it synced well with the festival of lights. The pair was already seen in Gabbar Singh and were lauded to share a good on screen chemistry. Directed by Dolly, the Powerstar actor plays a factionist from Rayalseema in this flick.

Produced by Northstar Entertainments, this movie is the official remake of the Tamil film Veeram starring Ajith and Tamannaah in the lead roles. The supporting cast in the Telugu version has Kamal Kamaraju, Ajay, Siva Balaji, Ali and Rao Ramesh. The shooting commenced from September with a pause due to the actor's political commitments.

It is likely to resume from this month. The technical crew has music rendered by Devi Sri Prasad. Once the shooting is resumed, it will run at a brisk pace to release the film for next year Ugadi on March 29, 2017. Meanwhile we hear that Pawan is expected to act in another remake of Ajith’s film Vedhalam as well.

Here is a glimpse of the song Jivvu Jivvu. Power Star Pawan Kalyan as the hero, the most awaited movie Katamarayudu is slated for the release on 24th March. Shruti Haasan is the female lead opposite Pawan Kalyan in this movie. music is composed by Anup Rubens.see more

Pawan Kalyan, Shruti Haasan Stills From Katamarayudu Movie !! Katamarayudu is an upcoming Telugu language film directed by Kishore Kumar Pardasani which features Pawan Kalyan and Shruti Haasan in the lead roles. It is a remake of Tamil film Veeram (2014). The film is scheduled for a worldwide ...see more

Katamarayudu movie got "U" certificate from censor board and movie is going to release on 24th March 2017 Worldwide. Check out Katamarayudu Movie Stills !! Katamarayudu is an upcoming remake Telugu language film directed by Kishore Kumar Pardasani which features Pawan Kalyan and Shruti Haasan ...see more