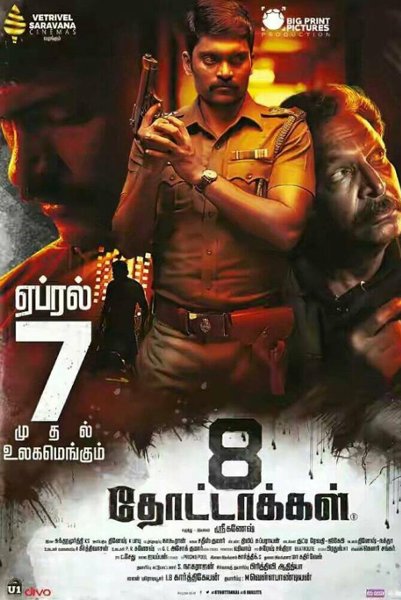 The first look of '8 Thottakkal' was released by Vijay Sethupathi

As the film '8 Thottakkal' go on floor for the shoot, it has began to trigger the expectations of the audience. As the title '8 Thottakkal' (8 Bullets) suggests the film is precise and pierceful with the talented technicians and and is filled with a very powerful content that will be on target. The first look poster of '8 Thottakkal' directed by was released by Actor Vijay Sethupathi who has keen eye, ears and heart for youngsters with flowing talent.

Produced by M. Vellapandiyan under the banner 'Vetrivel Saravana cinemas' jointly with 'BIGPRINT Pictures', the film '8 Thottakkal' is being directed by debutante Sri Ganesh, former assistant of Director Mysskin. '8 Thottakkal' has new face Vetri and Aparna Balamurali (Maheshinte Prathikaaram) in the lead roles and actors Nasser, MSBaskar, Amma Creations T.Siva, Mime Gopi and Meera Mithun in the pivotal roles. While KS Sundaramurthy of 'Avam' and 'Graganam' films composes the tracks, the movie '8 Thottakkal' is well bounded and tied up with entirely new and fresh technicians.

"I always love cop oriented films. Inevitably the genre will be specially welcomed by our Tamil Audience. '8 Thottakkal' has already created more hype among the audience with its piercing title and I am very much glad to release the first look poster. All the best team ... come out just like a bullet .. "says Vijay Sethupathi in greater enthusiasm. 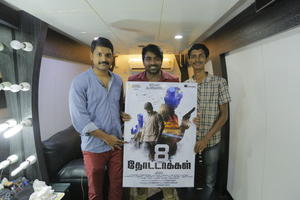 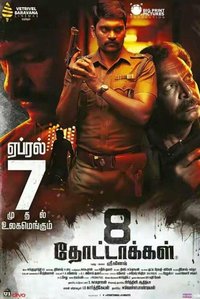 After the massive hit of 8 Thottakkal, producer M. Vella Pandian of Vetrivel Saravana Cinemas will be producing the suspense thriller ‘Jiivi’ involving IB Karthikeyan from Big Print Pictures as the Line Producer. ‘Jiivi’ is directed by a debut director V.J. Gopinath who has announced recently by ...see more

‘8 Thottakkal’ is the most awaited film directed by debutante Sri Ganesh, who previously worked as an assistant with director Mysskin. This film has been setting trends with its promotions and songs. Music composer Yuvan Shankar Raja acquired the music rights of the film. This New–Age–Cop Thrille...see more